So I will fill you in on a little story, back in 2013 I was just starting my adventures with sourdough baking. I was working in a supermarket bakery in Australia, quite remote and at the time sourdough was not yet on trend as it is today. In an Australian sourdough magazine, I first read about a "Sourdough Library". I was fascinated and couldn’t stop talking about it. Once I finished my baking course I decided to go off on a three month adventure to Europe, it was here I had the privilege to bake with Master bakers from France, Cornish bakers in Cornwell and you guessed it… visit the Sourdough Library.

The Sourdough Library is quite a sacred place. 128 sourdoughs with intriguing stories once you get to know them. That’s why there is a “Sourdough Librarian “ known as Karl De Smedt who has made this library come to life and shares the love of sourdough by collecting unique cultures from all over the world.

Now let’s fast forward a few years, I am now working for Puratos as Sourdough Ambassador. My job is to travel and share my passion to other bakers all over the world and, you guessed it, learn how to feed the sourdough babies in the Sourdough Library. So I would like to share my experience with you. 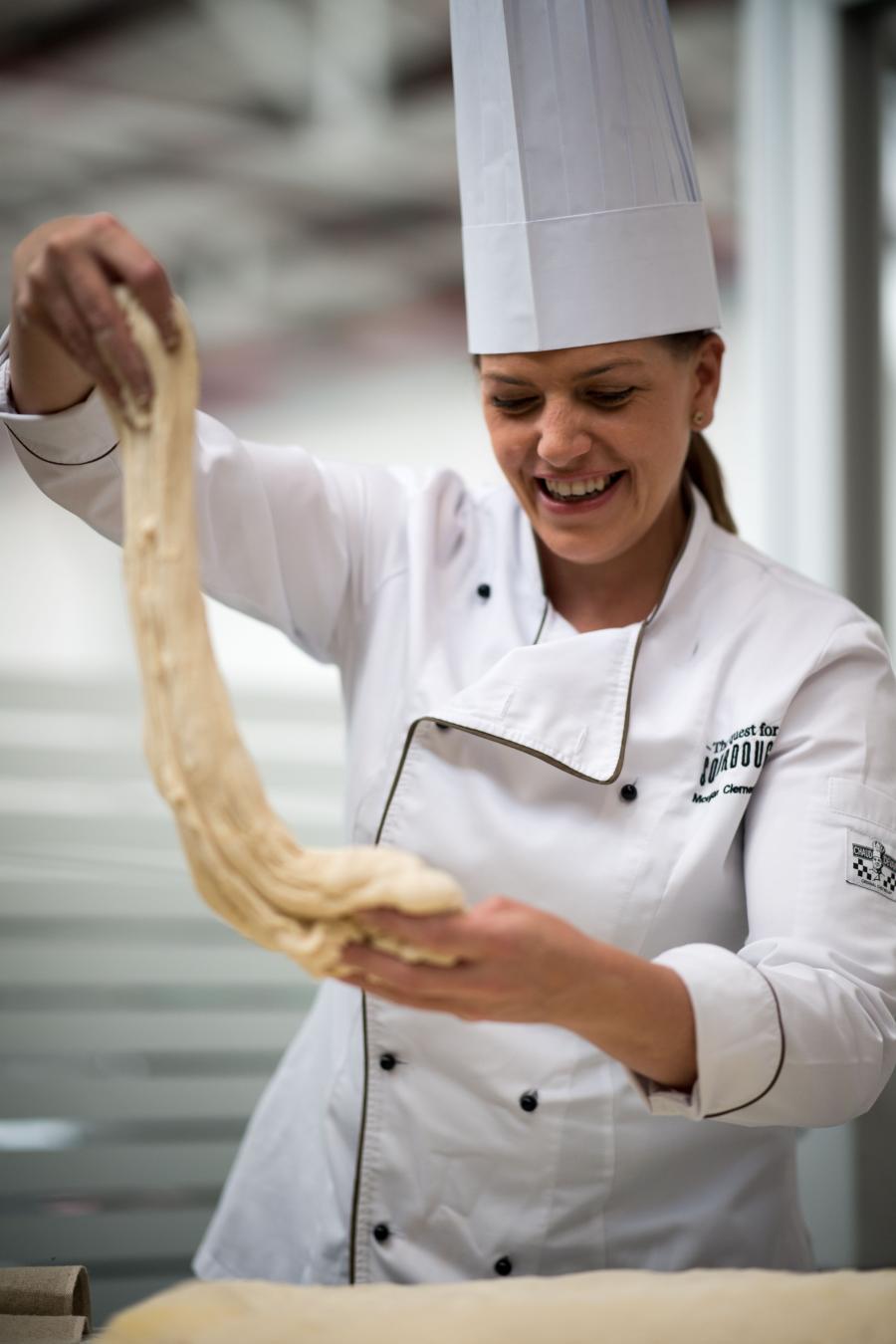 Now the first question you might ask is how long does it it take to feed 128 sourdoughs? Well it takes days, a lot of cleaning, measuring and a whole lot of tasting. Yes, as a sourdough baker I thought I should taste all 128 Sourdoughs. This way I can make the connection between different flavours, sour notes and even textures. The first sourdoughs were all from Italy, those had a very similar taste and texture and even though they looked the same they did have some different feeding calculations to be respected and provided a good practice for what was ahead in the next days.

Once a sourdough arrives in the library it is put into a well sanitized glass jar and can be kept “sleeping” for a period of up to 2 months. During that time of hibernation it sometimes develops what is also known as the “hooch” - the flour settles and the water forms the hooch on top. This is just your sourdough telling you they’re hungry. No harm done, just stir it in and then we are ready to refresh.

The first refreshment is done following the recipe of the sourdough’s owner, using also the same flour that is sent by the bakeries to keep the sourdoughs alive. All equipment is to be well cleaned and sanitized. It requires up to four people to manage this mammoth task and of course a very good set of mixers working full steam ahead for the four days. As I taste each of the sourdoughs, I’m shocked to taste both creamy, acidic, cereal and of course fermented flavour notes. Some of the sourdoughs require addition of seed mixes, a combination of up to three different flours, some of which we even have to mill ourselves!

As we go higher through the numbers we then get to the ones from China No° 64 and its there that it starts getting interesting. This one is actually very sticky and has such an distinct character. When you are refreshing this one its known to get very messy. Oh but so enjoyable. There is something really self-satisfying about getting to see the intimate details of microorganisms coming to life right in front of your eyes.

I was really looking forward to reaching No° 66. That one is close to my heart, not only because it is Australian, but it is also belongs to Brett Noy, from Uncle Bobs Bakeries. If you remember back when I mentioned I packed up and went off into Europe quite a few years ago, he was the one who I look on as a mentor, encouraging me to contact Puratos and begin my training there that has led to four years as an International Technical advisor travelling the world baking fantastic breads. So naturally I asked Brett if I could do the honor of baking bread in St Vith, Belgium with his number No° 66.

Then moving along, up to No° 104 we get to “That’s some Pizza’s” sourdough proudly owned by Will Grant who is a certified “Pizzaiolo” at the International School of pizza. Not to mention can make a mean vegetarian pizza. This sourdough was created in 1897 however came to life in 1983 making these beautiful pizza crusts for longer than I’ve been alive!

As we keep going through so many amazing specimens I start to imagine the stories of each of these special living sourdoughs and my taste adventure continues. Just nearing the end of the week we get up to the latest editions, I must admit I was very excited to get to No° 125 coming from a very dear friend of mine Anita Summer from Ljubljana, Slovenia. Anita and I met on the first Quest for Sourdough adventure. It was here we were with our good friends the “Hooligans”, yes you heard right and guess what that’s even the name of the combined Sourdough culture that we created. This was during one week of fantastic knowledge sharing and fabulous creations in the bakery in our home away from home in the Center For Bread Flavour in magical St Vith. It was here I had the pleasure to meet and bake with Anita, and I was even every so happy when I was invited to bake with her in Slovenia and it just happened to be the ceremony where Karl came to collect the sourdough from her to take into the library. And here I am feeding it and keeping it alive, so very special.

As the last sourdough is measured, mixed and placed into its respective jar and back to sleep my heart feels satisfied. As I look around and think back of my week, I would have to say it was one of the most rewarding experiences, to know that you are taking part in the preservation of Sourdough and all its magic for the future generations. Also to know the parents of all these, what I describe as sourdough children, can rest easy knowing their sourdoughs are in good hands and for the world to appreciate.